I’m so glad I got the three-year extended warranty when I bought Eskay (that’s short for Shyama Kali) back in August 2012. It didn’t cost much extra, and given the way my previous machine, Auset, had died abruptly, it seemed like a good idea.

Two years ago solid-state drives were just getting to be really popular. The MacBook Air I inherited from my husband, bought in 2011, has one. Himself had installed SSD boot drives in his Mac Pro and his new workstations, because they’re just so much faster. No more fixing a cup of coffee while Windows loads. No moving parts to get jolted while you’re carrying the notebook around. Still too expensive per GB to make a good storage drive, an SSD nevertheless seemed ideal as a boot drive in my custom-built computer with the two drive bays. 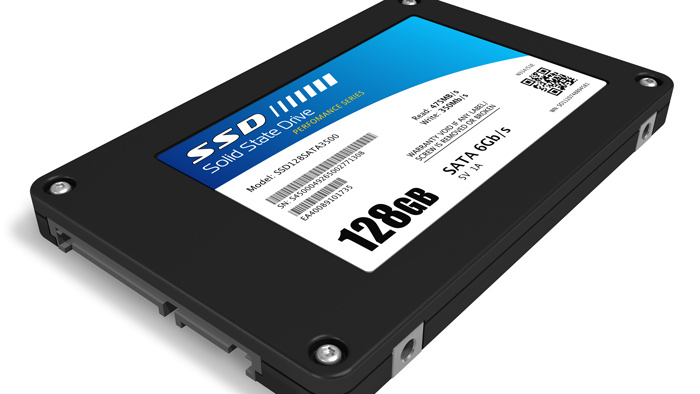 Until this past Thursday, that is.

I’d finally made it back to the office to get some work done, and even (amazingly, given my condition this past month) done some work, that evening. (I’d been too tired in the morning because on Wednesday I’d done something horrendously strenuous like drive to the bank or buy groceries or something like that.)

Suddenly, for the first time since I’ve owned this machine: a Blue Screen of Death with a worrisome message on it. (Not that a bluescreen is ever a good sign.)

“Did you update Skype recently?” My husband asked. “I know a couple of people who had no end of bluescreens and problems after the latest Skype update.”

Well, yes, Skype had updated itself a few days back, and I’d just seen a Skype i/o error message, which I used to get a lot of back in the day and which did not, then, have anything to do with my disk. But further investigation suggested there might be other and deeper problems. 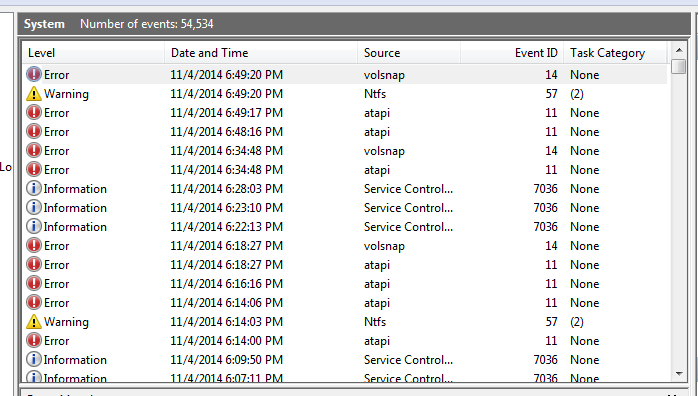 The error messages say wonderful things like “The shadow copies of volume C: were aborted because of an IO failure on volume C:” and “The driver detected a controller error on \Device\Ide\IdePort0.”

Looking back at the Event Log for the past month, I see clusters of warnings about processor speeds being reduced by firmware, and occasional disk warnings regarding paging operations, but nothing like this. (I later learned that you should turn off both paging and indexing for SSDs, a thing to keep in mind when the replacement arrives.)

The ATAPI errors start just before 5 PM on October 30th and they’ve continued with varying degrees of frequency since then.

When I first rebooted after the initial bluescreen, everything looked okay…until I went to answer a message in Outlook and couldn’t save it. And then tried to run the inbox repair tool and got a warning about a disk error.

So I tried running CHKDSK with repairs. Three times it stalled out at exactly the same place. When I ran CHKDSK without repairs, from inside a DOS box in Windows, it reported no problems.

Since the ATAPI controller wasn’t reporting problems with the HDD, it appeared (both to me and the generally savvier hubby) that what I was facing was SSD failure, not controller failure.

I used to write a blog about backing up your computer. In one post, I linked to a page that contained a collection of hard disk failure recordings. In another, I included a recording of one of my own external drives making “tock, tock” noises. The recordings aren’t available anymore, but if you’ve owned enough computers, you’ve probably heard one of those clicking or grinding noises, and faced the doom it heralded.

With an SSD, there’s no head moving across a platter to make “tock, tock” seeking noises. There are no spinning disks to grate against each other. SSD failure takes place in silence, apart from the increased fan noise after the bluescreen.

It took me a while to dig out my receipt with the purchase date and the 3-year warranty on it. I have folders for all of my computers, but either I never made one for Eskay, or I have hidden it so well I can’t find it.

The good news: Eskay was still in warranty. The bad news: warranty repairs, the kind you have to send your computer away for, take about 2 weeks if you’re lucky. It would cost me less to buy a new 120 GB SSD than to have my main computer out of my hands for two weeks.

The friendly Sager support person on Twitter suggested I phone tech support, and the equally friendly support person I talked to offered to send out a new SSD in advance of my returning the old one. (Yes, they put a hold on your card when they do that. They’re friendly, not gullible.)

The new drive and the RMA should arrive tomorrow, or Thursday at the latest. In the meantime, I’ve been copying, exporting, backing up, and generally planning for the complete system reinstall that I’ll need to undertake once the replacement drive gets here. Outlook data. Bookmarks (I keep most of them on Delicious, but have a few in my browsers.) Passwords. Then there are the driver downloads and the program install files, though Himself reminded me that it would be easier to use the Chocolatey package manager to install most of my open-source programs.

Meanwhile, I have the MacBook Air (SSD so far functioning fine) for email and web browsing, and I can work on Eskay between bluescreens, if I don’t need to use Outlook. (This is a pretty serious limitation, frankly, even though I run most of my mail through Google Apps and can check it via Gmail.)

The sounds of failing hard drives are many and universally ominous. But SSD failure seems all the more sinister for its silence.