As a member of the Oakley Chamber of Commerce, I get invited to all the official city events, as well as to the chamber events. I’ve never officially joined a chamber of commerce before, though I visited the one in El Cerrito. This year I joined two at once (Oakley, where I live, and Brentwood, the next town over), the better to get to know the place I live and the people who live here. The chamber mixers and other events are convivial and frequently hilarious in a good-natured, small-town way. As  a home-based business, I probably won’t be hosting a Breakfast with the Mayor or a chamber mixer any time soon, but I’m certainly going to keep attending them.

This morning at 10 AM there was a groundbreaking ceremony for Carpaccio Ristorante at Oakley Plaza around the corner from us. The restaurant is due to move from Antioch to Oakley as soon as the new building is finished, possibly as early as this summer. (From empty lot to open restaurant between March and September seems optimistic to me, but then again, we saw a housing development appear pretty much overnight out on Laurel Road.)

Since I live within walking distance of Oakley Plaza, I could hardly avoid going. My husband—not enthusiastic about early-morning activities in general, and less so after staying up late with dinner guests—wanted to know what was going to be so ground-breaking about the ceremony. On the one hand, it was typical of its kind: a few remarks from the mayor, Kevin Romick, from the restaurant owner, Manuel Muñoz (no, that doesn’t sound Italian to me, either), from the architect, from the city manager, Brian Montgomery. Photos of the city council members and the restaurateur with shiny shovels and hard hats. Refreshments and conversation. Sunshine and good cheer—and a lot of traffic noise from Main Street. 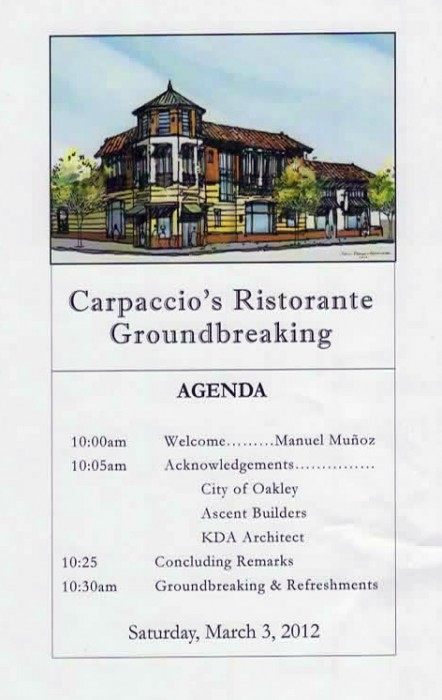 There were at least half a dozen people there with cameras, but I didn’t have mine. The first to be posted (that I’ve seen, anyway) are on Mike Burkholder’s blog. You can even see me in one of them.

Update 3-4-2012: Mike has kindly given me permission to insert one of his photos here, so here it is:

In all honesty, I think they had to bring the dirt in along with the shovels, because otherwise there would have been nothing but pavement. But if the soil was fake, the enthusiasm was genuine. Vice Mayor Carol Rios explained how excited all the city employees were when City Hall was built. The manager of the Black Bear Diner across the street came to congratulate Muñoz and his family. Jim Darling invited us to breakfast tomorrow at the Order of Red Men (originally Sons of Liberty).

It’s a long way from everything, but I do like it here.